Hello, and greetings from Boulder CO!

Happy MLK Jr., Day and welcome to the fourth edition of Mindful Mondays. If this is your first one, please know that you are more than welcome to simply reply to this email with any comments or questions, I'd love to hear from you.

I work an unconventional schedule and until just now (9:45am Monday) forgot that today is a holiday.

A Colorado-based grocery chain with a health-food store vibe celebrated resolution reset day on Friday. As the idea of a national day off sinks in, it feels like a good day to to take a few minutes to do a quick assessment and recalibration of how the year is going.

Or give yourself permission to "embrace laziness," as this NY Times article suggests.

Whatever you choose to do today, I hope you can be present and savor it.

For over ten years I've had a work schedule in which I've usually had Mondays off.

This has worked out well for me because there's a two-hour radio show out of New Orleans that I love listening to and it's broadcast on Mondays only.

Only recently have past shows become available to stream after-the-fact which I suppose is a good thing.

But for a long time, if I wanted to hear Andrew's collection of blues music, I had to tune in Monday at 2pm New Orleans (Central) time, no matter where I was in the world.

If you like any sort of blues or jazz or funk or (usually a little lighter) rock, you might enjoy the greatest radio station in the world, WWOZ.

If you listen on a Monday anytime after noon, there's a good chance we're listening together.

The Importance of Accountability

My life feels profoundly different this week, and it's because a friend wanted some accountability (example #3 below).

I thought I knew some things about the power of accountability but the last few weeks have driven home how important it truly is.

As I've written here before, for a year and a half I've wanted to work out three times a week at a local gym, but I've only managed to average two times.

On Fridays I work with a trainer for an hour. On Tuesdays I work out with friends.

I show up for both workouts even when I don't want to. I show up even when I probably would not work out if I were making the choice in a vacuum.

I've struggled to add a third weekly workout. I'm not ready to pay my trainer for a second session each week.

Because one of the mental blocks to the third workout was not having a set program when I show up, I decided to follow James Clear's 3rd Law of Habit Formation, "Make it Easy."

This past week I took my trainer out to lunch and we came up with a set workout for that elusive Day Number Three. (Let's call that a $20 consulting session.)

I'm happy to report that early this morning I got up, went to the gym and worked out all by myself.

It's far from a habit but it's a start. And beginning the day with such a huge win felt incredibly good.

Example #2: You're reading it

I've wanted to put out a weekly newsletter for awhile. A lack of clear vision was holding me back.

I realized that it didn't have to be a massive undertaking, it could be whatever was showing up for me each week.

I'm still not sure how things will develop, but having started it, I'm committed. This is week four of four.

As I looked over the things I've done this year and what lays ahead, this newsletter is the thing I'm most excited about.

On that note, if you're receiving any value at all – or if you have suggestions for improvement – let me know. Hearing from people who have been in some way affected by Offgrid Mindfulness has been the highlight of the past year.

Example #3: Reaching out to a friend

A friend who lives 300ish miles away texted me this week: he wanted to know if I'd be interested in a daily push-up and pull-up challenge.

I know I already talked about the gym, but this one's different. I've wanted to up my game in these basic bodyweight exercises and this was a perfect opportunity.

We agreed on a semi-absurd number of reps for each exercise. (75 push-ups and 20 pull-ups.) We're allowed to take as long as we like each day to hit our numbers—I can do 20 reps of one pull-up each if I choose.

The amount of effort the exercises took was way more than I (and he) anticipated. I was wiped by the time I was finished.

When I woke up the next day my arms were tired and sore. I was beat up.

If I didn't have an agreement with my friend there is absolutely no way I would have exercised the next day.

Zero chance. I would have told myself that my body legitimately needed a rest day.

Instead I got on my toes and palms and started pushing.

Five days in, I feel better than I've felt in a long time. Totally energized physically and mentally. A constant undertone of accomplishment.

Also, I have this pleasant feeling of my tight (in a good way) muscles letting me know that I've been exercising.

This experience-in-progress has 100% reinforced something I've known for a long time: although it's nice to be and to feel fit and toned, that's not why I exercise.

The reason I exercise is for my mental and emotional states.

And I wouldn't be writing this if it weren't for my Durango friend. Thanks man.

A Call to Action (with support): Your Turn

Is there some area of your life where accountability would help you achieve a way of being you aspire to?

Find someone who will help you get to that place. (This might be an area where social media can be a force for good.)

If you'd like some support, let me know. I can hold you accountable for finding an accountability partner. Or I can hold that space for you and serve as someone to check-in with.

Would love to help in whatever way you need. Let me know!

(For a good overview on accountability best practices, including what not to do, check out this article on Inc.com.)

From Around the Web

It's hard to know when being sucked into the internet is okay and when it's too much. I was in front of my computer a lot today (Sunday). I got a lot done that I wanted to do, and I'm less than an hour away from finishing this newsletter.

A few people called me about the Awake Clock; as I mentioned above, talking to customers and hearing their appreciation is one of the highlights of having this company.

Overall it's been a great Sunday.

But things like the following links allow doubt to creep in.

If I landed on the side of them being not worthwhile, I wouldn't include them. But...should this be how I'm spending my time?

Yes! Yes it is! Check these out! 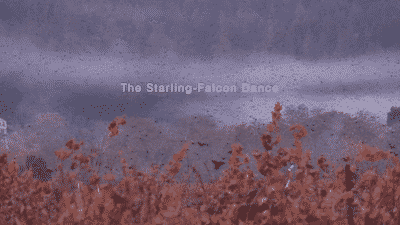 Okay, in addition to being plain-old super cool, there's something haunting and primitive and evocative about this video.

The implication of death, without actually seeing it.

That video reminded me of this (~15 second) clip of drone animation:

Not quite as impressive of the millions of years that went into the starlings' dance with death, but I don't think it will be that long until we see a similar re-creation.

I'm a fan of infographics. Have you ever seen Charles Joseph Minard's depiction of Napoleon's march into Russia? (It's 150 years old!)

I guess I might as well put it in here.

The thicker tan swath represents (by its width) the size of the French army as it invaded Russia, and follows the army's geographic march.

The much-thinner black band also represents the size of the army, in this case during its path of disastrous retreat. (Over 300,000 soldiers died during this campaign.)

There's a lot more to this drawing, click through to get the whole story. 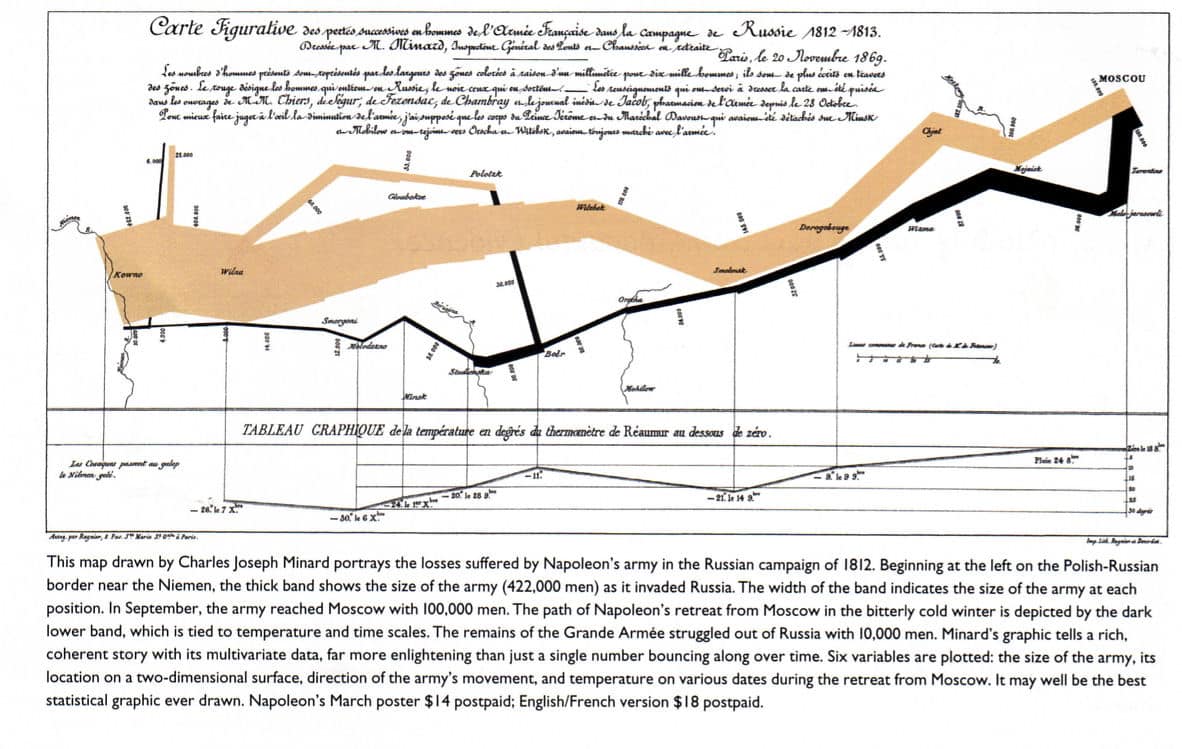 What reminded me of Napoleon was a review in the New Yorker of a new book called "Black Lives 1900: W. E. B. Du Bois at the Paris Exposition".* In the book are photographs, writings, and infographics meant to represent black life at the end of the 18th Century.

This infographic in particular held my attention for at least five minutes: 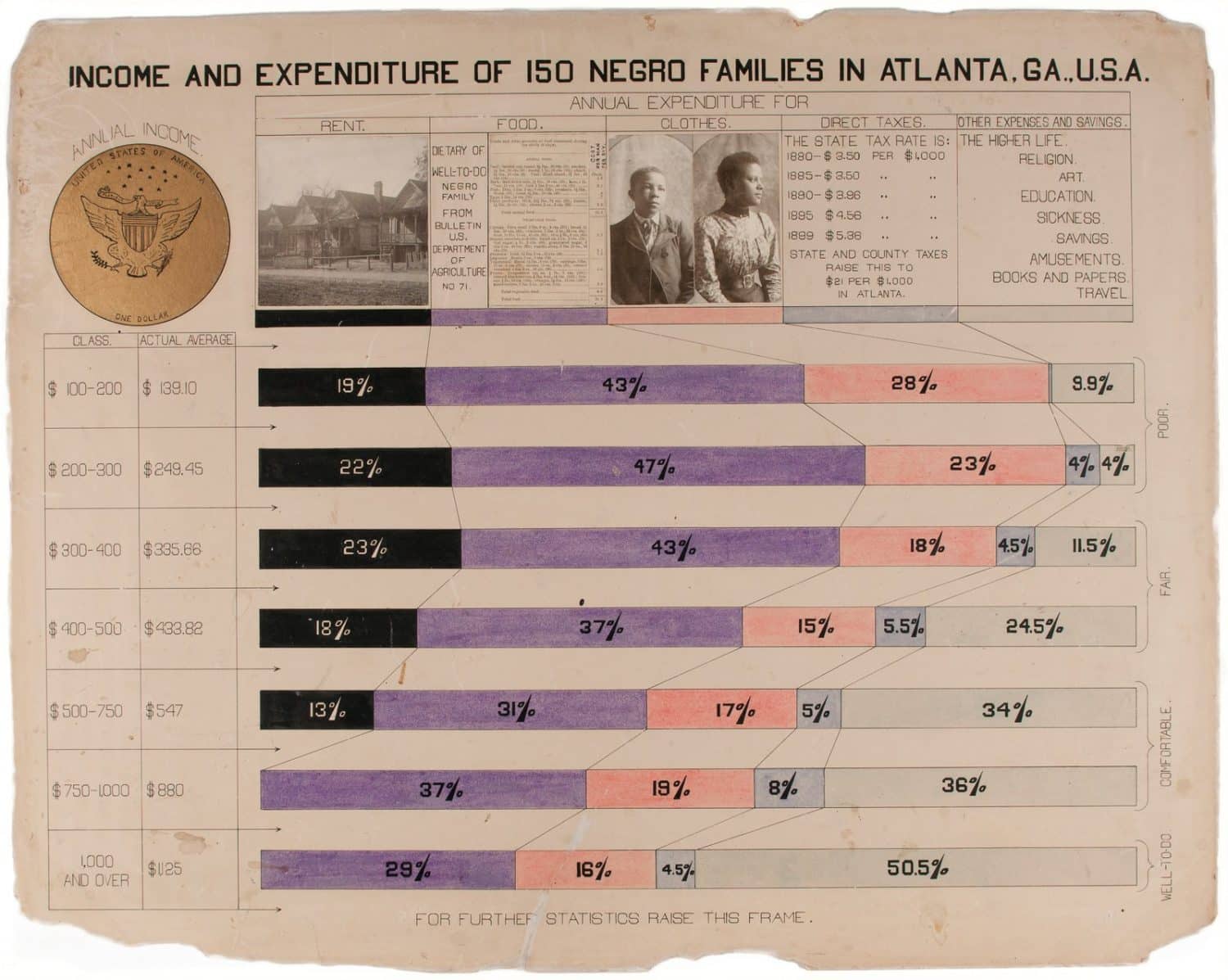 I think I was surprised that even the "Poor" and "Fair" families had some discretionary income (depicted by the right-most light blue bars).

The stats for both of these graphs could have been presented in other ways: a list of numbers, or a description.

But I'm realizing as I write this...

What a good infographic does is draws me in and gets me invested. Something catches my attention to hook me (whoa—cool colors and photos); then I decipher a key of some sort, which I end up feel compelled to unlock something with; and then the revealed payoff—a now-intuitive grasp of what's being conveyed (the army went from that many to that many?? Whaaaaat?)

There's also an unconscious comparison to most infographics I see today. Often clickbait-y and one-dimensional, I don't get the sense they exist because someone was passionate about conveying a point. They are created and used solely because they attract eyeballs and clicks (as in digital traffic on a website).

Then I look at the two presented above and have a hard time processing that they were created in 1869 and 1900. Although as with their modern mass-produced counterparts, they were created to attract attention and convey information, there's real depth.

And we're still looking at them today. They're masterpieces.

There's also an unconscious comparison to most infographics I see today. Often clickbait-y and one-dimensional, I don't get the sense they exist because someone was passionate about conveying a point. They are created and used solely because they attract eyeballs, as in digital traffic on a website.

Then I look at the two presented above and have a hard time processing that they were created in 1869 and 1900. Although they also were created to attract attention and convey information, there's depth.

And we're still looking at them today. They're masterpieces.

A few topics are percolating for the next few weeks that are a tad less productivity-feeling and are more in the mindfulness vein.

But while we're still in this mood: is there anything you want to get done this week that you haven't done before? Let me know.

And thanks for keeping me accountable, whether you know it or not 🙂

* Some of my punctuation is deliberately "wrong." I haven't done the in-depth research (aka googled) but I remember reading somewhere that when quotes are around a proper name (such as a title) it's okay to put the period outside the quotation marks. Otherwise the reader won't know if the period is a part of the title of this book.