When I first moved into my current house I was disappointed that it sits on a corner. There's a fairly-regular stream of cars and I can hear them in my bedroom. It's nothing like the cacophony I experienced in New York City, but that's one of the reasons I moved. Returning to Brooklyn after my first three weeks in Boulder, for the first time in my 15 years as a New Yorker, the city sounded LOUD.

What a difference a month of quarantine makes. I'm sitting on my front lawn and given how little interaction I have with the outside world - even on hikes people are understandably reluctant to interact - I love being out here watching cars and trucks and people walking and biking.  Every once in awhile there's even a social exchange.

On a more mindful front, I've been working on a mini-essay about attention and amusement and it's not that good so I'm sitting with it for another week. A few quick things instead...

I might have used this quote before, and that's because it's a good one.

Yesterday I got an email from an Awake Clock customer who was looking for an accountability partner because she's struggling with using her phone in bed late at night.

I agreed, but only on the condition that she keeps her phone overnight in another room.

When you're breaking a bad habit and creating a new one, you have to make things as easy as possible for you to succeed. In the case of addiction, willpower is easily overcome. One of my biggest breakthroughs in recovery from alcoholism was finding out that I hadn't been weak or stupid. I was addicted, and addiction trumps willpower. Even for strong and smart people (not that I'm one of those either).

If this happens to you and you don't want it to, you're not weak or stupid. The richest corporations in the world pay the smartest people in the world to keep you glued to your phone so other people can sell you things you don't need.

It's not your fault, but it is your problem.

My new friend who emailed me was prepared. She already had a charging station set up somewhere else. She was making it easier for herself to succeed.

She even reached out for help. Not an easy thing.

Not relying on some unstructured, unsupported goal (though she has one), this is the system she set up:

Because it's a serious addiction - not that hers is any more serious than most people's, she's just aware of it and wants to change - I can't say for sure how she'll do. But I think she has a good chance of kicking it. Night One was a success!

I know from personal experience that the freedom from nighttime phone use is surprising in how sweet it was.

If you're struggling with your phone use and would like some support, feel free to get in touch. Am happy to help in any regard.

Daniel Craig's final James Bond movie was supposed to come out this month but the release has been delayed in the hopes that people will be able to go to theaters in November.

(Is there anyone who doesn't think he's the best Bond?) 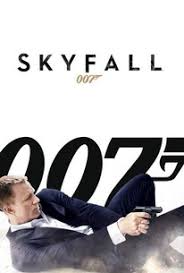 GQ recently published a feature on the actor anyway, and I willingly got sucked in. I'm not a James Bond fan per se, but they're ubiquitous, right? I'm not sure if I was excited for Craig's first Bond movie – did I even know who he was? – or if I just went to see it just because...I'm a member of the herd? Don't know.

The first 20 or so minutes of Casino Royale were easily the best in any Bond movie. (Spoiler alert: there's a chase scene.) Prompted by the GQ article, I rewatched the movie a few weeks ago. It holds up.

I don't usually have an HBO subscription but I will for the next few weeks because of Westworld. The other night the algorithm hooked me with a recommendation for the second Craig/Bond installment, Quantum of Solace. That one held up as well - as the worst of the current Daniel Craig Bond movies.

Looking forward to rewatching Skyfall sometime soon. Directed by Sam Mendes (American Beauty, Revolutionary Road), I don't think it's a stretch to say it's the most emotionally complex Bond movie. Check it out and let me know what you think.

Here's an example of a micro-amusement, an idea which I'll expand on next week. Memes, quotes, GIFs, etc. all fall under the category.

This one might seem political but I think everyone in the United States would agree with it, regardless of who the President is. I saw it flash through one of my feeds so I don't know who to attribute it to:

Ideally, the worst person in the world and the President of the United States would not be the same person.

Have a safe week,