The idea of personal freedom has been showing up a lot for me lately.

After 20 years of struggling with drinking, I got sober in August 2010. I lived in New York City at the time.

On the streets of the city I sometimes came across very large solid steel sheets that (presumably) covered big holes in the ground. They looked like sheets of plywood but much bigger and much thicker. If you were to look at one you would know without any thought process that it is unimaginably heavy.

In the months after I was finally able to stop drinking I had this recurring image:

For my entire adult life until that point, I had been pinned face down under one of those steel sheets. A crane of some sort – God? Good fortune? A combination? – lifted the steel; for the first time I was truly free.

But get this: not only was I lucky enough to get sober; I was lucky enough to love being sober. I savored every moment. I would learn that not everyone has the same experience.

The overwhelming sense of gratitude and freedom pervaded my life throughout my first year. Even though I felt like I was totally done drinking, I didn’t know for sure if it would last. What wasn’t lost on me was that regardless of what happened, I would never ever get sober again for the first time.

I soaked it in; it was, without exaggeration, the best feeling ever.

One of the reasons this is up for me in the end of January is because Martin Luther King’s speech during the March on Washington played a part in how I got sober.

(More specifically, I was moved by Mahalia Jackson’s role from behind the podium. Sensing the crowd needed a hook, she incited him to “Tell them about your dream, Martin!” thereby helping create what may be the most famous oratorical moment in history.)

The observation of his birthday last week (even though he was born on the 15th, as pointed out by a reader of this newsletter) and the listening of two hours of MLK-inspired blues tugged my memory back to those early days of freedom.

But in addition to the MLK reminder, the week has been full of messages that while some freedom is gifted, we often have a choice to be free — or, at least, a choice to work towards freedom.

David Foster Wallace and another kind of freedom

As fate would have it – or is it the Baader-Meinhof phenomenon? – the David Foster Wallace “This Is Water” commencement speech crossed my figurative desk again this week.

DFW presents a typical not-exactly-pleasant post-work scenario of bumper-to-bumper traffic and long lines at a fluorescent-lit supermarket (with “soul-killing muzak or corporate pop”).

Within this setting – which we all experience in some form – Foster Wallace offers a choice of perspectives: our default self-centered setting of “…fear and anger and frustration and craving and worship of self….” which “…[o]ur own present culture has harnessed….”

Or, he says, we can choose something different:

But of course there are all different kinds of freedom, and the kind that is most precious you will not hear much talk about much in the great outside world of wanting and achieving…. The really important kind of freedom involves attention and awareness and discipline, and being able truly to care about other people and to sacrifice for them over and over in myriad petty, unsexy ways every day.

That is real freedom. That is being educated, and understanding how to think. The alternative is unconsciousness, the default setting, the rat race, the constant gnawing sense of having had, and lost, some infinite thing.

If you have the time it’s worth hearing his words in his voice; if you don’t want to devote 23 minutes to it, you could spend a worse five minutes than listening from minute 18.

Other ways to experience this speech:

Listen or read in its entirety

The video is worthwhile, but the excerpted text (in voiceover form) is very pop-culture; larger themes are approached in the unabridged version.

The “Hooyah” version of freedom

This week I “happened” to press play on an audiobook I’ve had downloaded for…a year? Coincidence that it fits in here? Or is it confirmation bias?

The book is a memoir by David Goggins called Can’t Hurt Me.

Goggins goes from an abusive childhood through life phases (including a stint as a 300-pound doughnut-eating Ecolab exterminator) to become a member of the Navy SEALs.

Although it’s riveting as a memoir, Goggins and his ghost writer, Adam Skolnick, frame the book as a self-improvement guide.

If I were reading the print version I think some of it would sound contrived; maybe even corny. But the audio version is a reading by the ghost writer with interjections of conversation between him and Goggins. Their camaraderie is evident and for these two particular people it’s a perfect format. 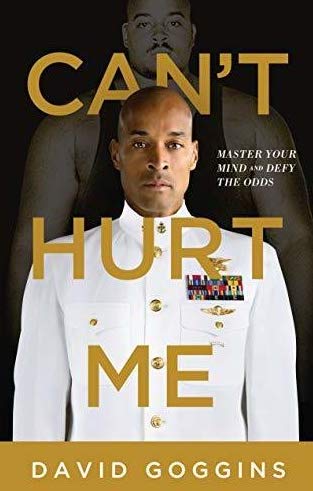 “Situation: You are in danger of living a life so comfortable and soft that you will die without ever realizing your true potential.

Mission: To unshackle your mind. Ditch your victim’s mentality forever. Own all aspects of your life completely. Build and unbreakable foundation…

It’s an exhortation to uncover your own freedom: This will hurt.

To shift our mindset Foster Wallace has us paying attention; Goggins prescribes writing and action designed for discomfort.

“There’s no growth without discomfort,” said my mountain bike coach. No pain, no gain.

I started meditating maybe eight months after getting sober. It isn’t so much that I feel better when I do it every day.

Rather, my experience is that I definitely don’t feel better when I don’t meditate. The way it shows up for me is irritability, usually in the form of other people. The checkout clerk that Foster Wallace imagines. Or my coworkers.

I’ve been working in restaurants for awhile. Ten years ago I regularly got into shouting matches with the chefs I worked with. Apoplectic-style shouting.

The chef where I work right now can be…challenging. I don’t yell at perceived pettiness or injustice. I watch my mind do its thing. My body still reacts physiologically – blood pressure rising in the fight-or-flight response of the sympathetic nervous system – but I get to choose to not say anything.

I can examine later whether it’s worth having a conversation. There’s a bigger game to play involving keeping a job that, for the most part, I love.

Freedom you can have tonight

This newsletter isn’t about selling anything. Most of you reading it already own an Awake Clock.

But other than periodic relief from my caffeine addiction… 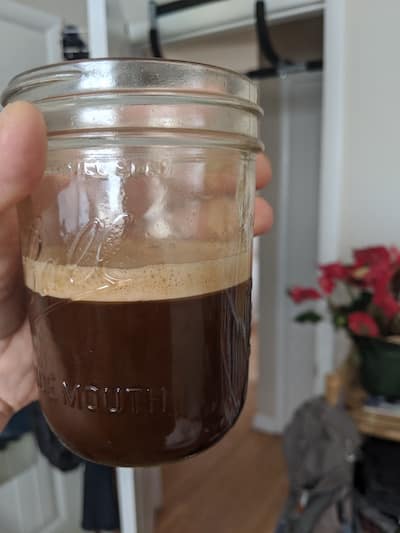 …the last time I experienced an acute sense of freedom was two years ago when I started leaving my smartphone out of my bedroom. I’ve written about it all over the Offgrid Mindfulness website so I won’t recount it here, but my life got better – freer – immediately.

If you still keep your phone within arms reach of your bed, stop it.

If you say it doesn’t affect you you’re most likely kidding yourself: your nervous system knows it’s there.

If you already leave your phone outside your bedroom, try leaving it in another room during a time you would normally have it nearby. Leave it at home when you go on an errand. Or in your car while you run into the store.

It’s freedom you can choose to experience today. So why wouldn’t you?