Given that you may have been in pre-Christmas runaround mode last Monday, much of this week’s newsletter will be similar to last week’s.

Along with few year-end tasks that need to be completed, my personal focus is mainly on what I’d like the coming year to look like.

As I wrote about last week, for the past few years I haven’t committed to any resolutions. Instead I came up with guiding words for each year. These words helped me choose courses of action at different junctures.

(I won’t repeat the examples here but if you’re interested, drop me a line.)

Two years ago my word was vibrant; last year it was relentless.

Each served me in different ways, though I think the net effect of relentless might have been negative: it was too much of a mental beat-down whenever I truly needed downtime.

A strong contender for my 2020 word came to me in the shower 10 days ago. For a minute I thought it was a clear winner because no other word was making itself available, but since then a challenger of sorts has emerged. It’s been an illuminating thought exercise that I’ll talk more about in a bit.

But first, some questions to get your wheels spinning:

​I also mentioned that at a New Year's Eve dinner in 2017 I recorded a podcast of people’s intentions. Here are some questions those guests were asked a few days before their answers were recorded: 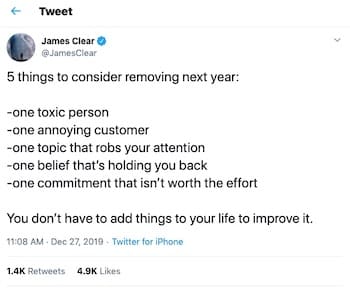 (Defensive sidenote: I enjoy Twitter and learn a lot there but it’s a classic social media time suck that I need to keep tabs on. This begs the question, is it worth it? A topic and conversation for a few weeks from now.)

I just came across the tweet today and it has me wondering, what do I have going on in my life that could be pared down?

Even though two years ago I sent out the question about giving up a behavior or way of being that doesn’t serve, I kind of forgot about it until reading this tweet:

The drama of the two words!

The word that came to me in the shower was not necessarily inspirational. In fact, it’s kind of…utilitarian. But it’s a Shower Thought...and as such, could there be a more clear sign that it’s the word?

Then on Christmas Day I was engaged in a Kitchen Conversation with a friend of mine who was talking about the aliveness she wanted to cultivate in her life. We weren’t talking about words of the year, it was a normal conversation, and several times with several people over several hours she used that word and each time it caught my ear.

As mentioned, two years ago my word was vibrant. Aliveness is almost an exact synonym but I couldn’t stop thinking about it.

The word that came to me in the shower? Diligence.

Not exactly a St Crispin’s Day speech of a word…but it’s a touchstone I want to keep present in my life this year.

Starting this newsletter is an exercise in diligence. Or rather, it’s a vehicle for creating and exercising diligence.

I need a persistent reminder of the systems I’d like to put in place so fewer things fall through the cracks. Diligence – the word – is a reference point that serves as a reminder (as is this newsletter).

It’s a reminder to get things done sooner rather than later. To put things away where they’re meant to be rather than leaving them out — literally and figuratively, in real life and virtually.

They’ll need to be put away at some point, why not be diligent about it?

As for aliveness? Well…

Thanks to the inner dialogue sparked by my friend’s use of that word, I’ve come to the realization that vibrant is my life word, at least for now. I can’t imagine a time when I don’t want vibrance to be a guiding principle for the kind of life I want to live.

Even the i-dotting and t-crossing implied by diligence is inspired by wanting to create a foundation for a vibrant life.

Have you heard? Diligence is all the rage in 2020.

Enough about me, it's your turn: What’s your word?

Seriously! Not rhetorical: What's your word?

I hope you ring in the new year in a happy and safe way!