Last week vs this week photo above 🙂

Last week I mentioned a reader who reached out for an accountability partner.

If you're struggling with phone use and want to talk to someone about it, please reach out. Just reply to this email.

After three months of sending out this newsletter I feel like I'm about to settle into a format that feels good. Given that this is Mindful Mondays, it's almost too much alliteration, but it is what it is.

Each week, three parts: a piece about Mindfulness, a Movie reference, and a...Micro-amusement.

Have you ever had the experience of someone jamming their phone in your face to share something with you?

My friend was on his phone checking something logistical for a project we’re working on. Then he saw a meme he thought I needed to see.

The mid-grade cleverness (i.e. the meme was lame) isn’t why the experience is sticking with me. It’s that we were doing something else entirely when it came into his field.

The practice of mindfulness is to pay attention to each moment in our lives. When we’re meditating it’s glaringly obvious when our attention has wandered — once we realize it. In my own meditation practice I can be on a train of thought for several minutes before I become aware of wandeirng, then gently bring my attention back to my mantra.

(I’m okay with still having mind-drift because an early teacher was adamant that although we will judge our own practices, the only important thing is that we actually practiced.)

We practice mindfulness because it’s difficult to exist in the present moment; if it were easy, we wouldn’t need to practice.

But for ten years the present moment has been even more elusive.

Those years were still “the golden age of blogging”, the first time some self-publishing content creators began to recieve attention at the levels of traditional media. But even if you weren’t massively popular you could still, with minimum barrier to entry, publish online. The challenge was having anyone other than your mom read it regularly. (Hi mom :))

In other words: even if you took the time to write one, who was paying attention to your blog?

Cal Newport, a scholar whose work is increasingly dedicated to our disserving relationship with technology, points out that “By 2010...cultural [blog-related] energy had been redirected toward a new form of online expression that had become recently ascendent: social media.”

With the advent of social media (and particularly the shift to having access to it everywhere), our attention was redistributed:

Users could post whatever they wanted. By an unspoken social contract, they would pay some ​​​​​attention to the posts of their close neighbors in the network soc​ial graph (regardless of the quality of this content), and these neighbors would do the same. The result: everyone could almost immediately begin receiving attention from an audience — a deeply appealing promise that through most of modern history had been available only to relatively small number of professions (writers, preachers, media personalities, teachers).

This attention redistribution was the hidden revolution instigated by social media. It solved a remarkably big problem facing the social internet: how to move beyond efficiently spreading bytes over networks to also efficiently spreading attention. And by doing so, it completely transformed the cultural landscape.

The need to distract ourselves from ourselves may have always been there, but since 2010 we’ve had the chance to fulfill it all day every day. Our spread of attention across our social networks meant we could devote less of it more often. If you wanted to get a point across, you needed to do it quickly.

“Micro-attention” led to content that could be consumed in a glance; memes and emoji are the results.

Much of what’s being put out there is genius. Let’s pretend that everything we come across is somehow worthwhile.

The question I’ve been wrestling with lately is: Is it worth it?

Not too long ago I was with a group of friends lounging around a living room. People were dipping in and out of the conversation, alternating between the people in the room and the worlds on their phones, sometimes sharing interesting newfound information.

This is completely (incomprehensibly?) acceptable. There was nothing notable about what we were doing. And there was no noticeable net negative. Even with our phones, the conversation was flowing in a positive way.

But was it worth it?

What would it be like if it were “just” a bunch of people in a room together with no external connections. No micro-amusements coming in on a regular basis.

Would the conversation be better? Would we have gone deeper into an important topic? Even if we hadn’t, would the lack of constant attention switching mean we would have been closer to paying attention to the present moment?

Would our collective Presence have been beneficial for the world?

I have a bias, but we’ll never know for sure. That’s not the world we live in, and we’ll probably never be there again.

If that seems remotely tragic to you, a mindfulness meditation practice might be in order.

Would love to hear your thoughts.

As I was writing the above I was reminded of John Sayles’ 1979 directorial debut, The Return of the Secaucus 7. It’s been over 20 years since I’ve seen it – to spell out the context, it was the pre-cell phone era – and I remember only one scene: three people finishing up a night of partying, hanging out on couches...talking. 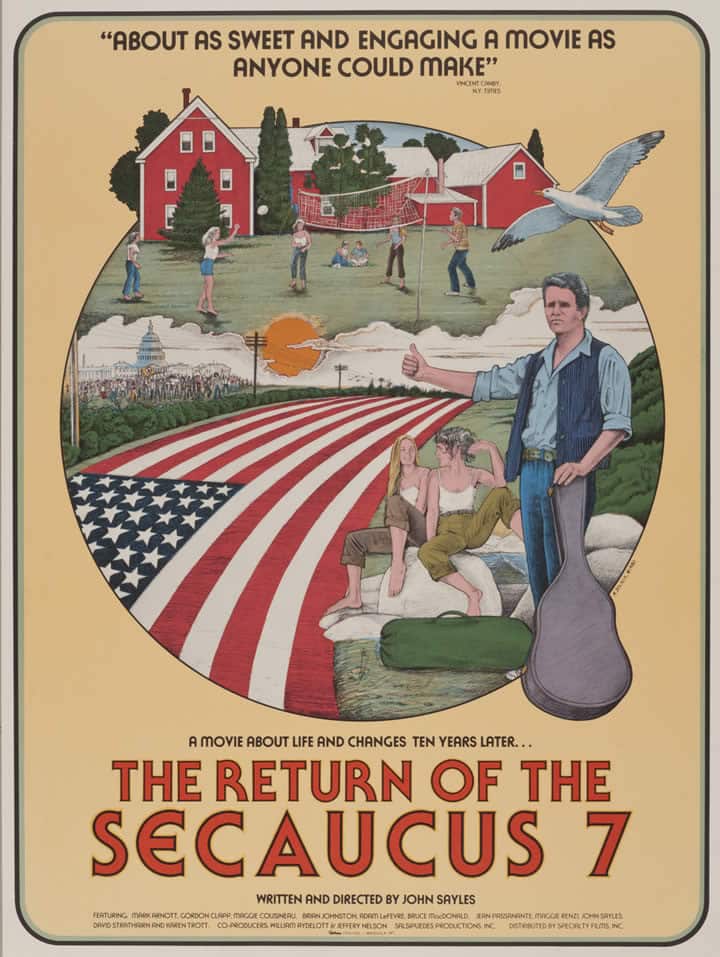 If you're into throught-provoking dramas you might want to check out John Sayles' films. His best-known are Matewan and Eight Men Out. My favorites are Passion Fish (a friendship circle of women on the Louisiana bayou) and City of Hope (life and corruption in a small city similar to Hoboken NJ, where I used to live a few blocks from...John Sayles).

A straight-up copy-and-paste from the blog Marginal Revolution. Not sure where these people are getting fancy toast for only $4, but other than that gaffe, this is a thought-provoking contrast of today with "decades" ago (say, February).

World 2.0 — “There are decades where nothing happens, and weeks where decades happen”

This is from a very able and perceptive correspondent:

Until next Monday, please stay warm (or cool) and safe,