“Everything you say in advance of a pandemic seems alarmist. Anything you’ve done after it starts is inadequate.” —Michael Leavitt, our 2005–2009 Secretary of HHS

Are you familiar with Mill Valley? It’s a lush green oxygen-rich little town just over the Golden Gate Bridge from San Francisco. Unlike the East Bay, there is no easy public transportation into SF, so the vibe is decidedly wealthy-suburban.

This has been my sweet little studio since last Monday: 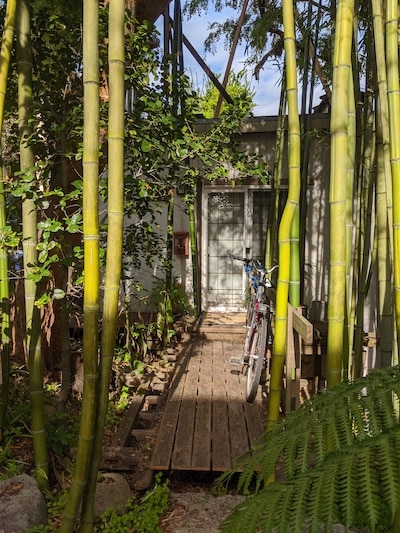 The past six days have seen a mix of sunny and 60s and rainy (bone-chilling) 50s. In addition to Mill Valley days of riding around town drinking too much coffee and swimming in the Pacific, I spent some time in “the city”: walked EVERYWHERE; saw a movie (Snowpiercer—funny name, great film) at one of the country’s best movie houses (the Castro); ate pork and green mole with homemade tortillas in the Mission; and posed a question to the universe as I walked the labyrinth inside Grace Cathedral. (The answer did in fact come to me as I deliberately paced the delineated path. Magic?)

Throughout it all I’ve felt a little guilty that I haven’t just chilled out at home and waited this thing out.

I came to the Bay Area for a conference that I was pretty sure I wouldn’t be attending. I bought the (expensive) ticket over a month ago; I’m not sure where the coronavirus existed in my consciousness at the time. Had I even heard of it?

As noted last week, I’ve taken some interest in tracking what’s been going on with COVID-19 and what might happen. As of last week, it didn't seem like going to a conference with two thousand people from all over the country and world was the best idea. The conference organizers addressed the issue in an email that trotted out superficial (and super lame) comparisons to the flu, noted that not many people would be coming from abroad, and said that bowing would replace hugging and handshaking.

They have my sympathy in being in their position. The conference—Wisdom 2.0—is about technology and mindfulness and one of the reasons I was attending was to make connections to expand the reach of Offgrid Mindfulness and the Awake Clock. Put another way, I was hoping to increase sales. Given the opportunity of speaking with such a highly-aligned demographic, I was incredibly conflicted about not going. (To be clear, I was as or more excited about the subject matter as I was about business dealings.)

Moral decision making gets muddy when money is involved.

That said, I didn’t go. And despite the finances involved, I think the organizers made a cowardly, short-sighted decision. There was more than enough information available to see where this thing is probably headed, and they chose money over public responsibility. (Oh wait—they offered a livestream option.)

Facebook’s annual developers’ conference, the Game Developers Conference, and SXSW (South by Southwest) were all canceled. If Wisdom had happened a week later, they would have had to cancel. Lucky them, I guess.

It’s not that the virus or disease are that serious—under normal conditions.

The common refrain is that it’s just like the flu, and in terms of the severity of how it affects people, that’s possibly true (but even that isn’t known for sure; there’s too much misinformation).

If the virus continues spreading exponentially (a concept hard for humans to grasp), it’s the second- and third-order effects that will be the problem.

The most obvious and pressing second-order effect

Unlike the flu, many fewer people will be resistant to the virus—it’s “novel,” as in new, as in it’s not a minor variation of a previous version. Each season’s flu is a variation on the previous season’s; therefore there is a degree of immunity. That’s not the case with a “novel” virus.

There are widely varying estimates as to how many will ultimately be infected with the virus. I don’t know the low end, but the higher end is 60% (or more).

An estimated 10% of people who become infected with the coronavirus will need to be hospitalized.

In New York City, if 50,000 people become infected (roughly 1 in 200 people, or .5%, a much lower percentage than conservative estimates), then 5,000 people may need medical attention. There are between 2000 and 4000 empty hospital beds in New York City at any given time.

There will likely be people who need medical attention who will not be able to receive it.

China has imposed massive quarantines and has likely stemmed the spread of the virus. Their government is set up to make that possible, and even though they may have been misrepresenting the seriousness to the outside world, they were taking the virus seriously from the earliest detection.

We’re not doing that in United States.

”The government has one job: to overreact. Not declare victory when cases are doubling."

If you want to dig deeper into what’s happening, you can see last week’s post. Also, much of my information is coming from seemingly credible people who post updates and threads on Twitter. They also post links.

In a world of endless information you have to discern for yourself who is credible and who isn’t. Although there's a lot of garbage out there, there is also the ability to find information that we wouldn’t have access to even 10 years ago.

I’m sorry if you’re not a Twitter person, but these are good places to start.

As data scientists, we (with @math_rachel) have done our best to look at the data around covid-19, and what it means to you and your community. Our view: it is appropriate to be very concerned, and significantly change your lifestyle, right now. 1/13

THREAD: On #Coronavirus, we may be entering a period of accelerating cases. The country could look very different over next two weeks. We’ll get through this, but need to take steps now to limit the scope and impact of virus. There are things we can do now to help ourselves. 1/n

Next week will be more mindful, but this has been top of mind. Let me know if you have any questions.